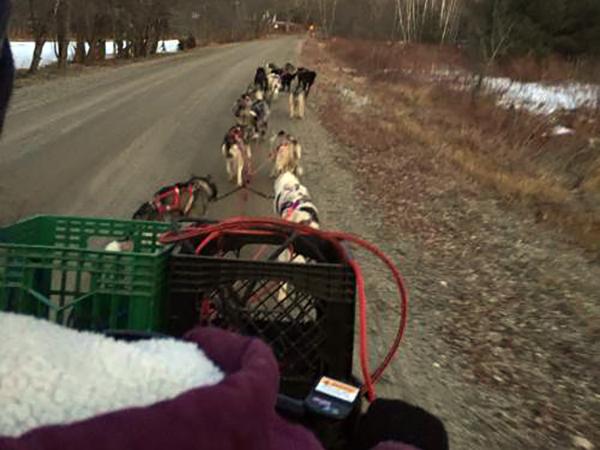 No, those aren't winning lottery numbers - except perhaps to me. Those numbers mark the start of one of the greatest adventures of my life thus far. In just about 3 months from now 24 dogs, myself and a handler will leave to make an approximate 4,540 mile trek to Alaska to begin training for a race that begins in 315 days, culminating a 20 year dream.

The road to Iditarod has been and continues to be fraught with obstacles to overcome, too many to list. Big ones, small ones - nothing about this journey has been easy thus far. I'm already on Plan C for a handler to accompany me to Alaska. I'm on Plan D for getting a sled for the race, but I finally seem to have nailed one down. I still haven't found a confirmed place to stay despite looking for 3 months now, but I think perhaps the one I really want may come through in the next week or so. Fingers crossed.

The most recent bump in the road appears to be getting a rookie reference. It has to be written by an Iditarod veteran. I thought I had that covered but the person who originally offered has only ever seen me race in the midwest and apparently doesn't feel those races are tough enough to properly prep you. Unless I come up with a different veteran who has witnessed me race recently and feels they have enough knowledge of my skills out there, chances are I won't be able to sign up in June as planned. Plan B is to wait until late fall, after I'm already in Alaska and can do some training runs with an Iditarod veteran up there.

I'm a little bummed at the delay since I was so excited to sign up, but more than that I'm insulted at the lack of faith in my abilities to run this race.

I can't guarantee I'll finish - nobody can. Shit happens out there. Hell, even veteran Iditarod mushers wind up scratching from the race each year.

What I CAN guarantee is that I have spent the past few winters putting myself and my team through as many difficult situations on the trail as I can find in order to prep us for what we might face. I can guarantee I plan to make damned sure the team has the training and experience next season to enter it strong and be able to keep up a decent pace. And I can guarantee that nothing short of catastrophe will make me scratch.

When I was just starting out as a guitarist and told one of my teachers that I wanted to be a virtuoso guitarist, he told me I would never be able to do that - that it was literally impossible for a girl to have the forearm strength to play like that. That didn't make me quit that dream; it made me even more determined to prove him wrong. Because that's who I am: I don't back down from a challenge, and if someone says I can't do something it makes my hackles rise and gives me even more incentive to do it.

So my response to that person who doesn't believe in me is to say thank you! You just added a whole lot of fuel to my desire to finish, because I have every intention of making you eat your words.

For the rest of you, my journey has just begun and I invite you to follow along in our adventure right here!