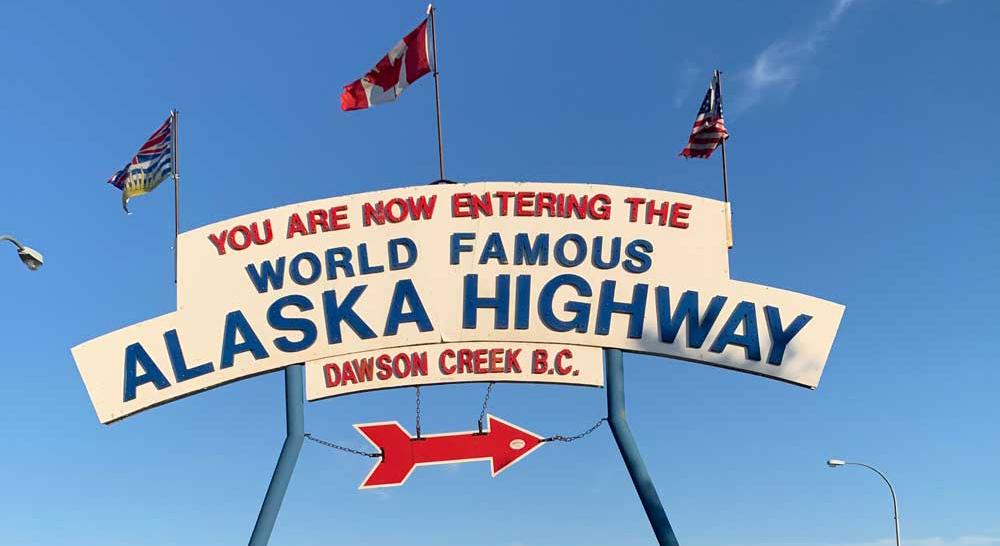 The Road to Alaska - Part 2

Thank god for the mushing community and facebook! As you may recall, my last blog left off with us sleeping in an empty parking lot in Hibbing MN with a truck making horrendous noises and no hotel room. The next morning I started messaging people in the area and Karen Hill quickly responded saying she had plenty of room at her place for us to drop the trailer while I took the truck into the shop. So we headed over to her place around 7 am with the dog trailer and parked it, removed my sled from the rack on the truck, emptied what we needed out of the truck and called the mechanics. They said they were booked up for days but were willing to at least take a look and let us know if it was safe to continue. Karen's husband Dave very kindly led me over to the shop (in case I needed a ride back) while Lara stayed behind with the dog team.

The mechanic/owner of Ken's A1 Auto Service came out and took a listen to the noise my truck was making and instantly diagnosed the issue: the truck had leaked out all of its power steering fluid. There was a small leak in the hose and over the course of the previous 2 days it had slowly been draining dry, thus the increasingly awful noise. He put more fluid in and voila: immediately the noise disappeared. Within minutes I was on my way, a bottle of extra steering fluid in the back to replenish as needed on the trip, and the assurance that it was nothing major that couldn't wait until we hit Willow. The relief I felt was enormous! 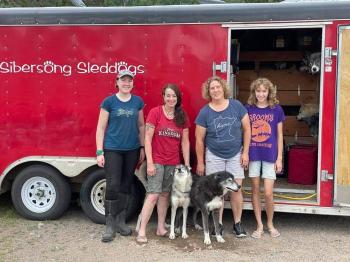 I think the Hills may have been a bit disappointed that we weren't staying longer, but we at least had the pleasure of enjoying some breakfast with them all before hitting the road again. By 10 am we were on our way back to the center of Hibbing and Walgreens for my COVID test which took about 2 minutes to complete, and then we were once again on the road headed west.

This time I decided to be smart and the first thing I did while Lara drove was to figure out how far it was to the border from where we currently were and book us a hotel room at a little more than the halfway point. By god, I was determined to get that shower and a comfy bed that evening!

Next step, check Walgreens in MT again to see if any appointments had opened up for the next day, but still no luck with that. So I called Marias Health Clinic to see if we needed an appointment for Lara's test.

Unfortunately, the bumps in the road weren't over just yet because not only did we indeed need an appointment but they also closed at 2 pm the next day because it was Saturday. The only appointment they had was at 12:30 pm which meant we'd need to get to Shelby MT by then or be stuck there waiting until the clinic reopened Monday morning.

In order to arrive there in time it meant we'd have to drive most of the night. So much for that hotel room, which happened to be non-refundable since it was a same-day booking. We were seriously disappointed, but there wasn't much we could do about it. Since the room was paid for I decided we would still check in and use the room for as long as we could. 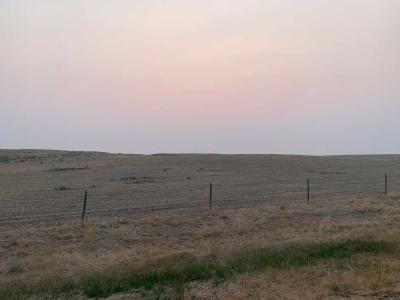 Most of the day's drive consisted of flat farmland and fields and fields of sunflowers. We crossed into North Dakota around 3 pm or so and arrived at the hotel about 5:30 pm. We dropped and fed dogs, then went inside. A shower never felt so good as that one did! Lara took a short nap after her shower but I stayed awake to take advantage of the free wifi. At 9 pm I woke Lara up and we packed up, dropped the dogs again, and were back on the road by 9:45.

We found some dinner at a McDonald's about an hour later and then took driving shifts of 2 hours each while the other snoozed. During my shift we crossed over into Montana - not that I could see much other than deer. Lots and lots of deer on the side of the road and one standing directly in it. Around 4 am I decided we were making good time and could spare some sleep time so I found a truck stop and we both slept a few hours until daylight hit. 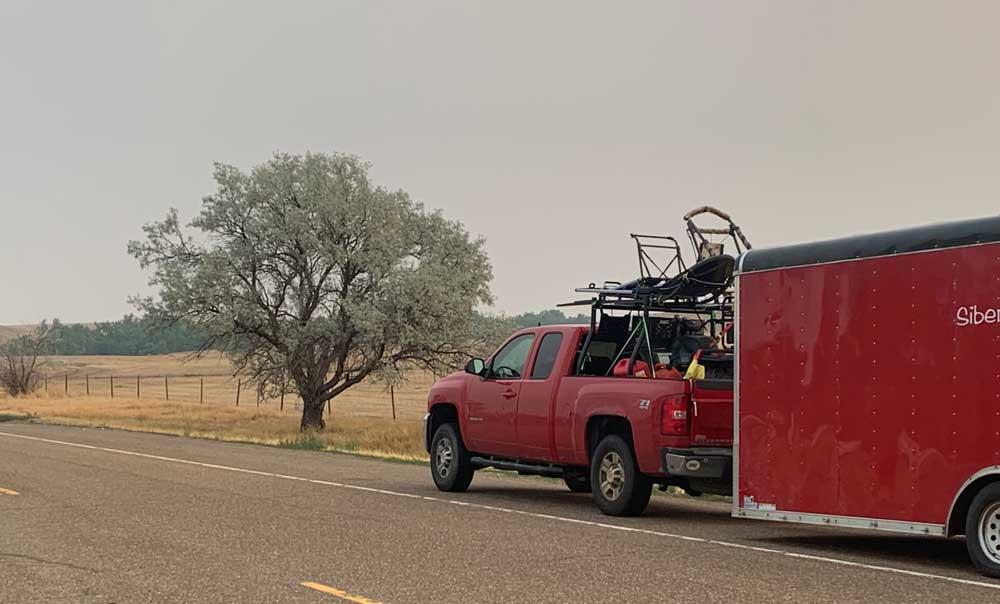 Montana was very different. Lots of prairie, some really different looking trees (one had leaves that were a pretty sage green color - what IS that tree?), and tons and tons of cattle farms. Most of it looked very dusty/dry with what I assume is what is referred to as scrub brush: little clumps of short grass or bushes. There was the occasional tree here and there, usually where there were houses or towns. Much of the landscape was pretty flat but where there were hills they were almost desert-like in appearance, except made of dirt instead of sand.

We made it to Shelby MT with about an hour to spare before Lara's appointment so we had lunch at Pizza Hut. While she waited to get tested I hit up the grocery store, then we found a nearby ball park to drop dogs and walked a few while we waited to pick up her test results. Some of the dogs were getting hotspots on their legs; I assume from laying so long on the dirt floors of the dog boxes. The temperatures were really quite comfortable however with a strong breeze.

Lara's test was negative (of course) so we hit the road headed for the Canadian border around 2 pm. It was a half hour drive to the Sweetgrass/ Coutts border from Shelby. Actually crossing in was fairly standard stuff, but then they asked us to park and go inside. And that's where the waiting began. With only one border guard working the window and 3 groups in front of us, we wound up sitting there for about an hour and a half while my anxiety creeped ever higher. Listening to the questions being asked of others just made me more and more nervous about whether or not they would allow us to cross Canada to get to Alaska.

We finally got called up to the window sooner than I expected. The guard asked a number of anticipated questions about why we were going to AK, how long I'd been working on the move, what our travel plans were, and whether we had paperwork to back up our responses. In what I felt was a relatively short time we were issued our pass to travel through Canada and given until the 11th to get to Alaska. Then it was off to the COVID testing area for our 3rd test of the week before finally continuing.

Getting past this obstacle was like having a huge weight lifted off of my shoulders. I could finally relax and enjoy the rest of the trip. We're in!!

Once in Canada we discovered that neither of our phones worked. We each received messages from Verizon about Canadian coverage, but our phones were automatically put into airplane mode and removing it was impossible - it would just revert right back to airplane mode no matter what.

Thankfully I had written some quick directions on a sheet just in case we lost cell or GPS service so we were able to figure out vaguely where to go and headed for Calgary. Without cell service we couldn't locate a hotel to stay at just outside the city and I was leery of staying inside the city and dropping dogs in a hotel parking lot. We finally settled on a huge and very crowded truck stop in Calgary to stop at for the night and slept in the truck/trailer once again.

First thing we did that morning was figure out how to get our cell phones working again using the truck stop's wifi to access our accounts. Turned out we had to click on a link in the text message Verizon sent in order to get the airplane mode to stay off.

We hit the road around 6 am, and about an hour later pulled into a large parking lot next to a Tim Horton's to drop dogs, get breakfast, and so I could change one of the trailer tires that seemed to have a slow leak (we had been constantly filling it the previous day). I could not locate the tire changing socket wrench that came with my truck however, and in fact thought I remembered it breaking when I tried changing a trailer tire back in the spring. I had a regular socket that fit the trailer lug nuts but there wasn't enough length on the socket wrench to really be able to put enough power into loosening the torqued-on nuts. So instead I just refilled the tire once again. I also used the rest stop to repack some of the things in the trailer that had been shifting the past few days, including the 4-wheeler. It was starting to get too narrow in there when loading and unloading dogs.

The drive north from there was fairly uneventful. Farmlands and prairie began to turn more towards forest and rolling hills, similar to the landscape of NH. Temperatures dropped during the day and towards midday I had to change out of shorts and into jeans and a flannel: it was 54 degrees midday and felt WONDERFUL! 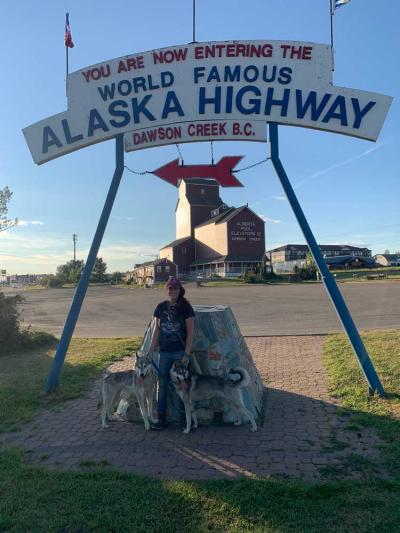 I had early that morning figured out how far I thought we could get that day and decided we should aim for Dawson Creek, mile 0 of the Alaska Highway (the AlCan), and then booked us into a hotel there. We wound up arriving in Dawson Creek around 5 pm, even sooner than I'd anticipated. On day one of the drive I had likened our road trip to a dogsled race because I realized that I had planned out the trip on a spreadsheet the same way I planned out my races: each 'leg' showing a start and end location, total number of miles, the estimated time it would take, how many hours of rest we'd take en route and at the destination, and an arrival and departure time. When we stopped briefly at the hotel in North Dakota I referred jokingly to it as a checkpoint, where we spent just as much time caring for the dogs as we did caring for ourselves inside - even just catching a super short nap before going back outside to get dogs ready for the next leg.

So if the road trip was like a race, I said, then our stop in Dawson Creek was our "mandatory 12 hour layover."

And we were more than ready for some time out of the truck. We checked in, then let the dogs out to eat and stretch their legs. While the dogs hung out on their drops I cooked us burgers on my little camp stove, even setting up my camp chairs and a cooler in between as a table. I cracked open a beer, put my feet up, and enjoyed the nice evening. After dinner we took Aly and Willow for a walk down to the Signpost at Mile 0.

I was excited to start the Alcan the next day - here comes the best part of the entire trip!