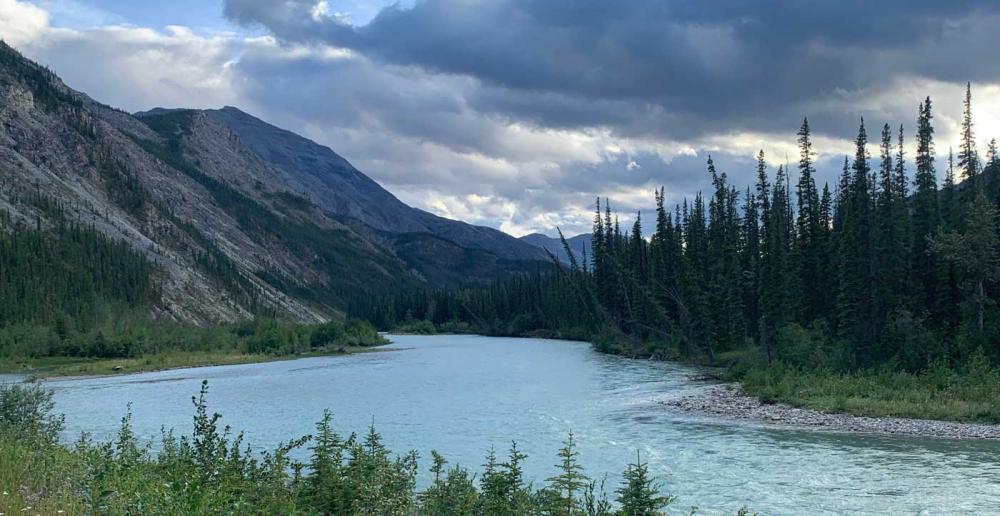 The Road to Alaska - Part 3

We've now officially been on the road for a full week, yet it doesn't quite feel that long despite all that's happened along the way.

Day 7 began with getting the leaky trailer tire changed at a tire shop in Dawson Creek, where they not only put the spare tire on for us but also patched the defective tire which had a screw in it. Lara didn't seem to appreciate my bad humor when I said "yeah, that tire was screwed alright!"

We had cell service for at least the first 200-400 km of the Alaska Highway, which was unexpected. The views as we got into the Northern Rockies were just amazing and kept getting better and better. The one disappointment was the lack of wildlife; we passed through areas where I had seen tons of sheep and elk on my trip down the Alcan two years previously but this time all we saw were a few deer, a porcupine, and a demented little beasty that looked vaguely like a mangy fisher cat and who hissed and tried to attack my truck as we drove past it standing in the middle of the road.

Temperatures were now so cool throughout the day that we no longer needed the air conditioning running in the trailer, and my shorts and tank tops were a thing of the past. (Little did I realize at that point that I'd seen the last of my summer clothing for the entire season....) 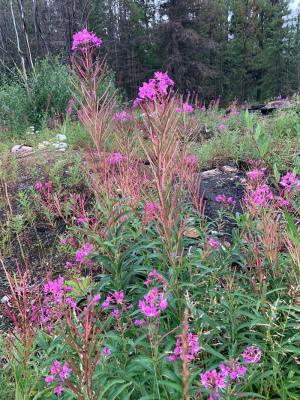 We passed through some of the recent burn areas in British Columbia where everything was blackened right down to the earth. It always amazes me how forest fires jump around and leave completely untouched areas.

We also saw our first fireweed, a pretty purple flowering weed that takes root all over this area and Alaska.

The scenery as we traversed the northern rockies was just breathtaking and we stopped often to take photos.

We made it just past Laird River & Hot Springs before stopping in a pullout area a little past 9 pm to drop dogs and water them. We spent the night 'camping' in the truck and trailer again but between the pesky mosquitos and Rebel whining, Lara didn't get much sleep that night. 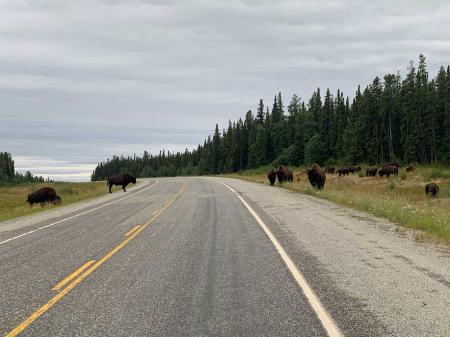 It's now daylight from before 5 am until after 10 pm. I was up and about by 5:45 this morning and found Lara was already up as well. I didn't want to drop dogs where we'd spent the night since it was so early and there was another camper stopped there still sleeping, so we drove about 30 minutes until we found a good pullout without anyone around. While Lara gave the dogs water I got out the camp stove and heated water for coffee/hot chocolate and cooked up some eggs & bacon for our breakfast.

We finally began seeing Bison this morning: lots and lots of bison! They have no compunction about just walking down the side of the road either, or sleeping on the road.

Temperatures hovered in the upper 40's all morning, occasionally even lower, and we were loving the sudden 'fall' weather! Once we got past the Rockies the scenery was not quite as spectacular as yesterday's, but still quite lovely. Cell service, however, was completely non-existent on this portion of the trip except while in the bigger towns.

Around 2:30 pm we reached Whitehorse and arrived at Hans Gatt's place to pick up my new Gatt sled. The sled is beautiful - I can't wait to drive it! I think both Lara and I were a little starstruck meeting Hans too, since he's such a big name in the sport.

After loading up my new sled we headed over to Rob & Louise Cooke's place to visit. The Whitehorse area, particularly around where they live, is gorgeous - very sandy terrain with huge mountains surrounding you everywhere. We stayed a few hours, had a pizza dinner and met about half the dogs before we needed to hit the road again. I was happy to hear that Rob is planning quite a few of the same races I am this winter so I'll be seeing him (and hopefully Louise some of the time too) frequently over the next 8 months.

We arrived at Cindy Baker-Hawkins' place around 9:30 pm, which is where we were spending the night. Cindy had graciously offered us a place to stay when she heard we were arriving in the area towards the evening. I loved her place and dog setup: multiple big fenced enclosures with a few dogs per enclosure, with lots of trees and these lovely wooden handmade swings in the yards.

Cindy and I have so much in common that we were up until about midnight gabbing away. Lara crashed much earlier than that, but then she hadn't had a lot of sleep the prior night either.

We took our time hitting the road the next morning, and after having breakfast with Cindy and her boyfriend she took me out to meet her dogs. Many of them are Matsi kids & grandkids which just touches my heart to know his spirit lives on in her yard.

While yesterday's scenery was pretty, today we went back to spectacular once we started getting back into the mountains past Haines Junction. Which is good, because there's not a whole lot of civilization between Whitehorse and Tok to entertain you! We had lost satellite radio at some point the previous day too and were stuck listening to my iPod tunes. 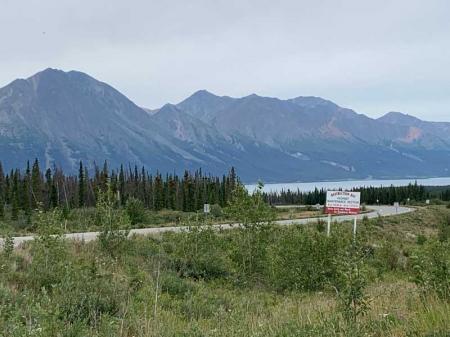 The roads after Destruction Bay were insanely bumpy but I had been warned about them in advance so they weren't a surprise. I was pretty concerned about how low the trailer jack and tongue were due to the weight on the back of the truck and in the trailer, but we'd tried to change the hitch/ball thing on the truck the night before to something higher and the damned thing just refused to come out. I also discovered that my spare tire had somehow descended a little bit and was dangling about as close to the ground as the tire jack was, but the missing tire-changing tool also was required to raise the spare tire up so there wasn't much I could do about it, other than to drive insanely slow over the bumpy sections.

We had completely disconnected the AC the previous night and stored it in the trailer since we hadn't used it in 2 days; temps were predicted to stay cool for the remainder of the trip It was as if we had jumped ahead 2 months weather-wise to October with daytime temperatures mostly in the 40's and 50's and occasionally hitting low 60's in the late afternoon.

Canada was lovely but we were quite happy and relieved to cross the border back to the USA that afternoon... and into Alaska! The border guards asked us very little, required no documentation other than our passports, and that was it. Lara said it was the easiest crossing she's ever done and I have to agree.

We stopped for dinner at Fast Eddy's in Tok, partly because we got there near dinnertime and mostly because everyone says the food is amazing there - and I will agree, it was!

Gas prices there were exorbitant though: over $4 a gallon. I was worried that they were going to be that high everywhere in Alaska but thankfully they dropped back down to around $3.50 a gallon as we got closer to Wasilla.

We fed and watered dogs alongside a river an hour or two outside of Tok, getting river water for the dogs since we'd forgotten to fill up the water jug earlier. It was super cloudy and starting to rain lightly so visibility for viewing the mountains surrounding us was obscured. We continued driving until about 9:30 pm when we found a pull-out to stop and sleep at for the evening. It was still daylight out when we went to 'bed'. 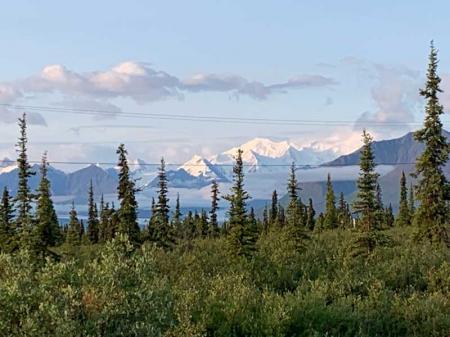 Next morning dawned pretty chilly (low 40's) but the rain was gone. We dropped and fed breakfast - last drop on the road!! - and heated up water for coffee & hot chocolate.

Further down the road we stopped and got an enormous cinnamon bun to share for breakfast. As we went through the Chugak mountains the views became absolutely breathtaking. I remembered this part of the drive from 2 years ago; I just forgot that it was so close to Wasilla and I thought perhaps I had somehow missed it on this trip. Boy was I glad I was wrong! We stopped quite a few times to take photos and just drink it all in.

This final day's drive was fairly short and before we knew it we were cruising through Wasilla and heading up the Parks highway. We rolled up the driveway of the house I had rented at around 10:30 am; well, actually we missed the driveway the first time past as it isn't marked. We wound up going a mile further before we could turn around and correct our mistake.

We drove up the half mile long driveway and got our first look at the place we'll call 'home' for the next 10 months: half log cabin, half house, with an enormous cleared yard surrounding it and various outbuildings. The house overlooks a small pond (or swamp, depending on the amount of water) and on clear days we can see Mount Denali from the yard. 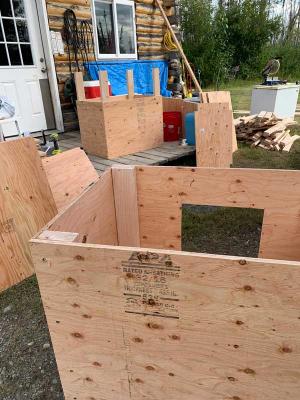 The owner had very kindly cleared out an area for us to use as a dogyard but we still needed to build dog houses and put in posts, and before we could get the dogs set up I needed to go get the wood to build them with. So for the interim we unhooked the trailer then strung some long droplines between the trailer and my truck (which I parked a short distance away) in order to space the dogs out more. They were at least going to be able to hang out on their drops most of the day now instead of being cooped up in the dog boxes.

We set to work that first day unpacking the truck and trailer and getting settled into the house. The next day my friend Jeff came with a weed wacker to help clear some of the undergrowth in the dog yard area and we measured out where we wanted posts to go. Then I headed into Wasilla to pick up the load of wood from Home Depot and get some groceries while Lara pounded in posts in the dogyard. 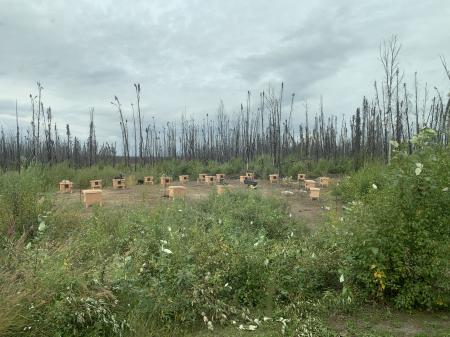 By the end of the weekend, 2 days later, we had 23 dog houses built, dogs all out in the dogyard on their chains, had taken the 4-wheeler out to explore trails and find a 5 mile loop to start training on and got completely unpacked.

And that's the end of the story about our trip to Alaska... but only the beginning of the adventure, so stay tuned!