We've been here in Alaska for about 6 weeks now. Hard to believe - it feels longer. The leaves have turned colors (or one color anyway: yellow), the weather is downright chilly (comparable to late October/November in the northeast), our woodstove is pumping and we've already seen snow!

Less than a week after arriving we were able to start training dogs. It was stop and start for a few weeks, as we'd get out 4 or 5 times and then have to stop for 4 or 5 days to wait for slightly cooler temperatures, but since the beginning of September it's been very steady, 5 days a week training.

One of the major differences here versus the east coast is that the mornings don't warm up quite as quickly, and the warmest part of the day is late afternoon instead of mid day. That means we can increase miles sooner. Back east, the team would be stuck at 5 mile runs for a month until the end of September, sometimes early October, because we couldn't hook up before 7 am in my neighborhood (or any trailheads for that matter), and by 8:45 am it would already be getting too warm. So while we may have the same number of hookups as we normally do this time of year the big difference is we can increase mileage whenever the team is ready, so we're already doing 12 mile runs.

It hasn't been all fun and games though. One of the 4-wheelers refused to start when we got here, despite working just fine when I loaded it into the truck back in NH. While we waited for parts to arrive to fix it we were stuck with just the one quad to train with for the first 3 weeks, which meant alternating teams each morning. We finally got the 2nd quad working again - only to have it die on us again after 2 runs. At that point at least the days were cool enough to run 2 teams per day but it would take half the day. After another 5 days of that we had it running again, but it kept stalling constantly. I think we've had a total of 6 runs so far with that quad working, and at the moment it's dead again.

A week and a half after arriving here Lara and I attended the Alaska State Fair. I don't recall twisting my foot or stepping wrong, but the next morning I woke up with my right foot hurting and by the following day it was swollen and I couldn't put any weight on it. Diagnosis: sprain. That was 5 weeks ago and it's still painful but getting better every week.

And we've already been to the e-vets twice, racking up some hefty vet bills. Nothing too serious but neither issue could wait the month until I could get an appointment and since I haven't had a chance to establish myself with a regular vet here nobody would work us in for an urgent care visit any faster than that. 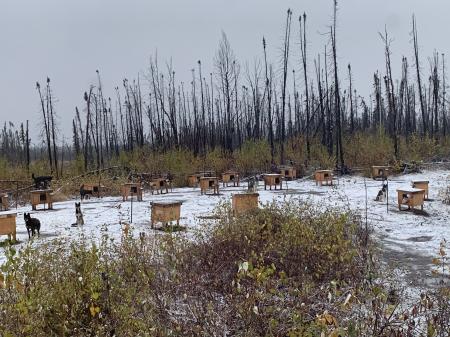 Since training isn't yet occupying all of our time, Lara and I have taken advantage to do some exploring of the state and play tourist. We visited Denali National Park one weekend, and took a drive up to Talkeetna another day. Drove up Hatcher Pass another weekend. And we've been getting a crash course in being Alaskans. Here's some of the things we've learned so far:

1. If you think New England weather is strange, you should see Alaska's weather. It can be sunny here, raining 5 miles down the road, and then sunny again 10 miles down the road. And weather forecasts appear to be more like weather suggestions. A forecast of 54F degrees as a high could also mean 44F or it could mean 64F. Forecast of rain? It might rain. Or it might be sunny too. Forecast of sun? Better bring a hat because it's likely to rain. In fact, the best bet seems to be to ignore the forecast and just look out the window in the morning instead.

2. 98% of the people here own at least one 4-wheeler or side-by-side. I'm fairly certain you could drive your quad just about anywhere here, because there are trails running alongside pretty much every main road. I mean, that's pretty cool right? I went to Wasilla one day and saw a 4-wheeler parked in a parking lot like someone drove it down to work. Which they probably did.

3. Everyone seems incredibly helpful and friendly. We stopped to ask a guy directions to a trail head when out exploring one day and not only got directions but also learned he moved here many years ago from Wisconsin, ran a fishing operation for awhile, has at least one ex-wife, and got an earful of advice on other trails we should try and how we should get a gun and bear spray if we're going out 4-wheeling in the woods. Now if only he'd been about 20 years younger...

4. Alaskans sure do love their espresso and weed! There are more espresso stands around here than there are Starbucks in Seattle, and if it's not a coffee stand on the corner then it's a marijuana store. Perhaps they could just combine them? I'm sure there must be some sort of Double Mocha Cuppaweedo someone can concoct.

5. Google doesn't know Alaska exists. Or at least, it doesn't seem to recognize that I'm up here. I have location services turned on but every time I pull up a Google map it defaults to Seattle. Yooohooooo! Hey Google, there is actually a part of the USA above Seattle, you know!

6. Dog mushing is NORMAL. Like, hardly anybody stops and stares when we're out there. People don't slow down as they pass us training and hang out their car windows with their cell phones filming us. They don't even LOOK AT US. We're more common than wildlife. Hell, we were in the local thrift shop one day and they had mushing harnesses for sale in there. And dog booties. And a skijor belt. Whoa.

Anyway, we are loving it here and the dogs are happy and running. Signups for other races start this coming weekend and we're planning/hoping to put 2 teams into a few of them. Stay tuned!