Fall training is heavily under way here, and both Lara and I can hardly believe it's only late October based on mileage. Dogs are at least a month ahead of where they would be if we were training back east in terms of cumulative mileage and length of runs - thanks to alaskan weather!

While I absolutely ADORE being in alaska and how awesome the training and trails are here, we're smack in the middle of what has to be the least fun part of training here: mud season. I'm not sure what I dislike the most about our current trail conditions: the constant mud or the frost heaves. Yes, frost heaves on trails. Have to say I've never seen that happen on the east coast. The trail heaves are so huge in spots that I literally have to slow the team down to 4 mph to avoid everything flying off the 4-wheeler when we hit them (including myself). 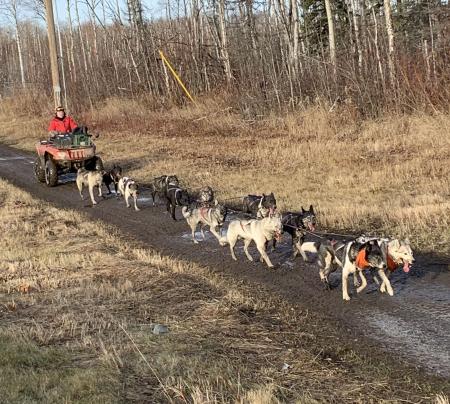 And the mud....oh my god, the mud. Between the occasional rain storm or light dusting of snow that melts and the nonstop freeze and thaw of the surface, the trails are just never dry. Spring mud season back east has nothing on fall mud season in Alaska, at least in terms of running dogs. After every run it's a 10 minute affair to rinse harnesses and lines enough to use them the next run, and they still look dirty even after that. I've been tossing the harnesses in the wash about once a week to try and get them cleaner, and even a wash cycle with soap doesn't get them fully clean. The side mirror on my ATV is useless - it's constantly covered in so much mud I can't see anything in it. I clean it off at the beginning of each run but before we've even gone 5 miles it's covered again. I find myself praying for a nice good deep freeze at this point because I'd much rather be booting every dog than dealing with this mud for much longer.

On a good note, we no longer have to stop to water dogs since there's so many puddles on the trail that they stay hydrated...

The frost heaves and bumps in the trails seem to be causing some early season injuries on dogs. A friend here warned me previously that his first year in Alaska he had a lot of injuries due to the trail conditions, and now I see it happening to my dogs. I've invested in an Equine Light Therapy pad which helps speed up healing (I know it works because I used it on myself in the past) and I'm going to bet that'll wind up being one of my best investments in the season.

On top of injuries I'm also dealing with 2 dogs that probably won't make the team because of medical issues: Alyeska continues to have urinary tract issues whenever she gets stressed on a run (in other words, any run over 10-12 miles) and Hiccup has been having increasingly worsening stamina issues the past 2 seasons so I brought him in for bloodwork and testing and he's got various things 'off' on his bloodwork but the vets can't figure out what's causing it. Between the two of them having multiple vet visits and testing, my vet bills are getting sky high. Ahhh, the life of a musher! 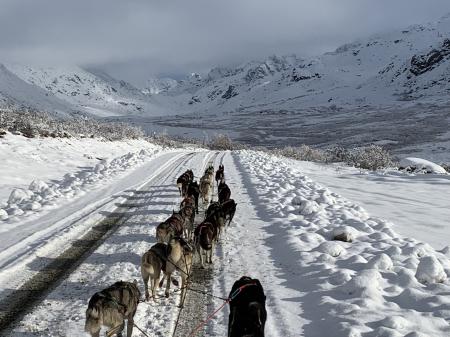 On a better note, most of our race entries are in! I signed up two teams for the Copper Basin 300 in January (and now just hope to god I actually have 2 teams of dogs, based on recent medical issues), two teams for a 64 mile race in December called the Alpine Creek Excursion, and 1 team for the Willow 300. We may still put a team with Lara driving in one more race this season, but are holding off for now.

And - drum roll - I made my Iditarod race plan. Seriously, the most difficult race plan I've ever had to come up with. It took me hours of studying and analyzing and reading trail notes, but I think I have a pretty decent plan with which to do the next step: start making my checkpoint bag lists. With shipping being so slow and the holiday season approaching, I figure I will need to start ordering supplies that I don't already have by December to make sure they arrive in time.

I also booked Lara's flight to Nome for the finish last week.... I guess that means I'd better get my ass to Nome next March, huh? :-)