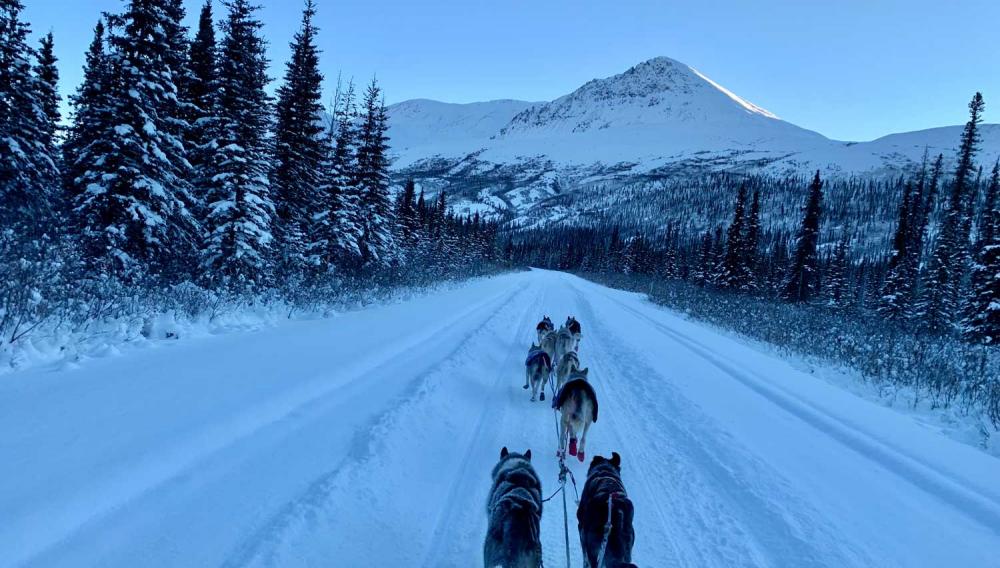 Hard to believe just 4 weeks ago it was in the 40's and I was complaining about the mud. Less than a week after my previous blog post the temperatures dropped, and the ground froze. I wrote a facebook post around that time with a photo of our thermometer showing 17 degrees, claiming sarcastically "Today's run with the 4-wheeler should be a blast."

I look back at that now and laugh hysterically. If only I knew what was to come.

We started having to boot every dog to protect feet. We shortened the runs a bit so as not to injure joints on such frozen ground. At least around our home trails in Willow. 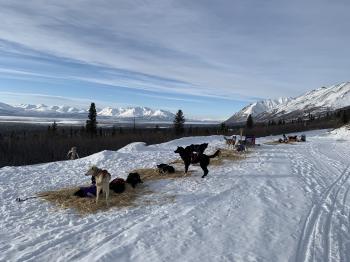 But on weekends we started traveling 2.5 hours north to the Denali Highway to run with sleds on what is a winter paradise. The first weekend we did this we did a 130 mile camping trip with a fellow Iditarod rookie, Matt Paveglio, and his handlers. We drove our teams in 3 legs up to Alpine Creek Lodge, a very musher-friendly place that is a regular resting spot for many mushers training up on the Denali. We spent 24 hours there resting, then ran the teams back to the trucks in 2 legs. It was a fun and amazing experience for Lara and I, and thrilling to be on sleds the first weekend of November. 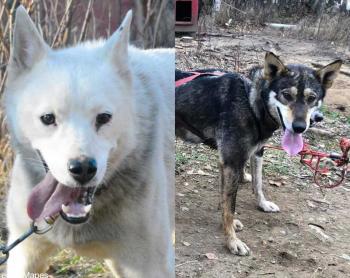 Two days after our first trip up to Denali we picked up 2 experienced Iditarod dogs from Meredith Mapes to round out the team. Alyeska has been having frequent UTI and urinary issues and has lost so much time off the team as a result (she refuses to run when she has a UTI) that she's no longer a contender for the race team at all; Hiccup had bloodwork done in October because he wasn't running well and it came back with levels all over the place. Multiple tests later we still haven't determined what's going on, and although he's running better now after being given some time off he is now a question mark also as a racing dog because of that bloodwork. So when Meredith posted that she had some dogs available for lease for the season Lara and I discussed it and decided it'd be a good idea to bring two of them in.

Since they weren't up to the mileage my guys are at we've spent the past 3 weeks working them up while getting a few mildly injured dogs back to the mileage as well. Both Cooper & Lava have settled right into the team as if they've been running with us forever and it appears they'll be an excellent addition to the pool this season. 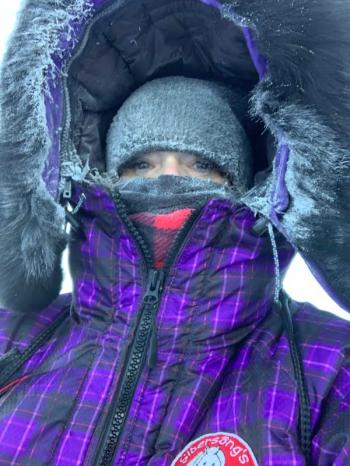 We went back up to the Denali Highway the next weekend, this time just for a day trip and a 35 mile run. By this time the temperatures had dipped to below zero everywhere - it was -15+ up at the highway and the first time I pulled out some of the warmer gear I'd been 'saving' for real cold temperatures.

Unfortunately we were in the same kind of cold snap in Willow as well, with temperatures not rising above zero even during the daytime. For weeks. We'd wake up in the morning to temperatures of -20, -22 and some days the highs weren't much higher than that.

We luckily got a few inches of snow in the Willow area, enough to cushion the ground for the dogs but not enough for sleds (or at least not enough if you wanted to actually slow or stop a team).

It became a learning experience. Learning that ATVs don't start in those temperatures. Learning that plastic gets very very brittle and just outright snaps (the crate on the back of the 4-wheeler got some very odd holes in it during this time). Learning that leggings don't really cut it as 'pants' at -22 (I TOTALLY get that whole snow-skirt thing now.)...

The bright side is that all the swampland around here froze up solid, so a whole host of new trail loops have opened up for us to use around Willow and we're enjoying exploring them and seeing new scenery as we train. On the 4-wheelers. Below zero. We most often wind up going out with two of us on the 4-wheeler so we can trade off drivers whenever our thumbs get numb from touching the throttle for too long. But we're figuring it out, this Life Below Zero stuff, and Thanksgiving week actually saw some temps in the positive numbers for the first time in weeks. 10 above never felt so warm!

But I chuckle to myself as I recall my facebook post about how cold it was going to be training at 17 degrees on an ATV.... oh, how naive I was a mere few weeks ago.