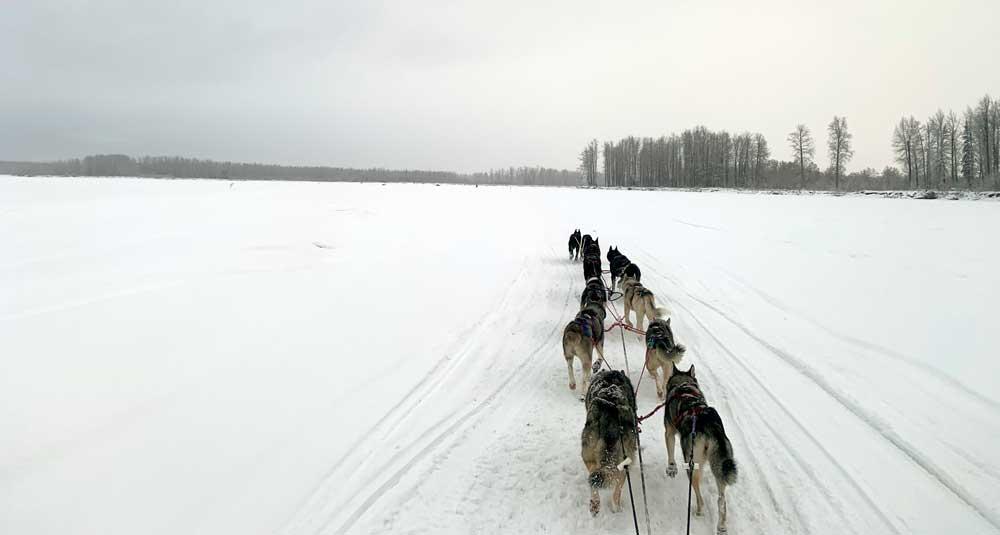 Putting on the Miles

It's getting harder to find the time to write blogs as the season progresses. Life has become extremely hectic, and the weeks are flying by. Here we are, already mid-January, and Iditarod is a mere 6.5 weeks away.

We've been running dogs on sleds from the house since the first weekend of December, and most weekends we do either back to back runs or camping trips with the teams. The 2nd weekend of December both Lara and I participated in a fun-run race up on the Denali Highway called the Alpine Creek Excursion (or the ACE race). 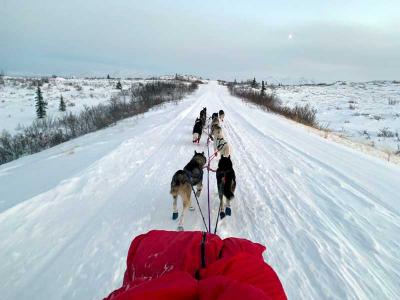 The ACE race was a unique experience. First off, there are few rules to it. No bib numbers or starting order. We were told to leave the parking lot & starting line sometime between 6 and 10 am on race day, and call out our names to the timer sitting at the start line. And you needed to reach the Alpine Creek Lodge, 64 miles up, by 7 pm for your time to be counted. Other than that, it was anything goes!

Since the lodge is a remote one that can't be driven to, that meant we would need to drive the teams the 64 miles back to our truck/trailer the next day. And no drop bags meant mushers needed to find a way to get supplies for themselves and the dog teams up to the lodge. Some teams participating had people on snowmachines haul their supplies up for them. Others, like Lara and myself, hauled everything in our dog sleds, which of course adds a lot of weight. Since we were spending the night at the lodge that included 2 days worth of dog food, spare clothing for ourselves, and a bale of straw each. 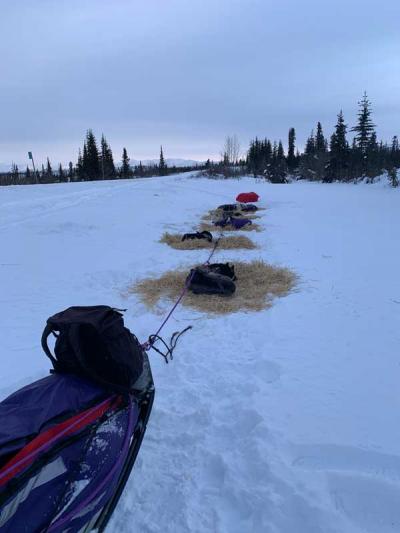 Camping on the ACE race

There were no team size limits in the race. Lara and I each drove 11 dog teams but other mushers had up to 16 dogs on their teams. Some mushers had a tag sled with a 2nd driver; some had entire handler crews on snow machines following them; some had barely anything in their sleds and others were loaded down with camping gear.

Since our teams weren't quite ready for a 64 mile run I decided we'd break it into 2 runs of 30 and 34 miles, camping out for a few hours in between. We weren't the only teams doing this and I got to meet another fellow Iditarod rookie on our campout: Katie-Jo Deeter. She decided to stop and rest her team at the same spot Lara and I were at, and we picked up some great tips from talking to her.

We made it to the lodge just before the cutoff time, coming in 2nd to last (Lara) and last place (me). The next morning we headed back to the truck and this time we broke the run into a 42 and a 22 mile run. That 2nd day was brutally cold with some fierce winds, and I later heard it was -40 in spots along the Denali Highway. The new gear I had picked up after our last run up there did the trick to keep me warmer, but I have to say it's still not as enjoyable to me to run dogs in that kind of cold!

Our next race was supposed to the Copper Basin 300 the 2nd weekend of January, but when we got closer to race day I decided the teams just weren't quite ready for a 300 mile race yet. On top of that my truck heater & defroster went on the blink so I decided to pull our entries. Turned out to be a good decision as Willow went into a really cold spell with temperatures hovering around -20 during the day and -30 at night and my truck engine froze and refused to start. We were technically stranded at the house for about 4 days until it finally warmed up enough to get the truck running again.

Overall the teams are looking good now, and we are getting ready for the Willow 300 which starts on January 26. I had entered 2 teams in the race but we've had a slew of shoulder injuries the past few weeks so we don't have enough uninjured dogs to field two teams. We may have Lara run the 150 mile race with a smaller team instead, just to get as many dogs out there racing as we can. 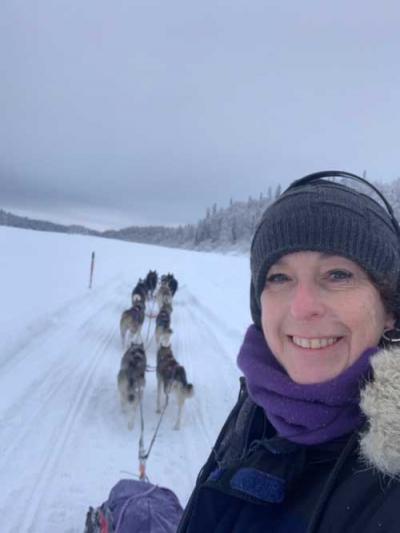 We did a 150 mile camping run this past weekend up the Susitna and Yentna rivers with a few other mushers, basically following (I think) the first 2 legs of the Iditarod trail up to Yentna Station and Skwenta Roadhouse. Yentna Station was amazing - homey and welcoming with delicious food. They are very musher-friendly, with wonderful wooded parking areas for the dog teams and a bale of straw available for us so we didn't have to haul it.

The other mushers we traveled with headed back to Willow the next morning while Lara and I continued on up the Yentna river to Skwentna. It's a 30 mile run from Yentna to Skwentna so we just looped through it and returned to Yentna without stopping.

Some interesting 'firsts' for us were seeing jumble ice (which I'd only ever read about), having a little ski plane fly right over our heads, seeing people hauling supplies up the river on enormous trailers being pulled by their snow machines (ok, maybe this doesn't sound exciting to you but it's not something we east coasters see every day!), and - for me anyway - being dragged by the team through slushy overflow after dumping my sled. 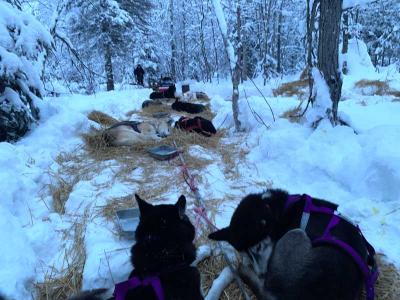 Yeah, that latter one wasn't much fun! I was completely soaked to the skin on one leg after that. But since the day was fairly warm I decided not to stop and change clothing but rather to keep going and just monitor how cold I got. Kudos to having good gear asmy wool long underwear wicked that moisture right away. By the time we got back to Yentna my long underwear was completely dry and only the very outer layer of my ski pants was still wet. Or rather, frozen at that point. But I was never really cold.

We rested at Yentna for 6 hours before heading out around 10 pm to make the 45 mile run back to the house in Willow. That night run was the best one of the camping trip; the temperatures started to drop and the dogs were perkier than they'd been the past 24 hours and kept up a much faster pace.

That's all the news from here for now! The next few weeks will be even more insanely busy than the past month as I not only have the Willow 300 race but shortly after that need to start prepping drop bags for Iditarod. I likely won't blog again until after drop bags are done.